“In the garden of paradise stood a rosebush. Here in the first rose, a bird was born. His flight was like that of light … “
(from the Legend of the Phoenix)

The Firebird, a legendary creature within many ancient mythologies, casts itself onto a burning funeral pire only to rise again from the ashes. The Phoenix is consumed and born again through fire, a lone bird and the only of its kind. It is a bird without equal.
Olena Yakymenko, on Aerial Ring, gives an equally inimitable performance as the Firebird. Accompanied by a rich musical score, she burns with intensity, fades with the embers and then emerges triumphantly from the ash to soar again into the heavens.

The color of fire guides the appearance of the piece. Deep, hot reds wrap the artist’s figure as she takes flight above. Speaking in the language of her body, she is light and warmth – an effervescent fireball radiating palpable heat and passion.
Through carefully crafted choreography and superb lighting design, we are also invited “under her wings” to the sacred, inner world of the Firebird. Vanquished in fire, the hot agony of death strips the Firebird of her power. To delicate, sparkling sounds she moves with vulnerable sensuality. The artist is now bathed in white light, and from this soft, pure place of surrender, she offers herself to new possibility. The curtain of smoke is torn to pieces and the wind rises under powerful new wings. The crimson Phoenix bird is reborn and we ascend with her as she reclaims the sky!
With apparent ease, Olena Yakymenko presents an luxurious melding of athletic precision and raw, unleashed femininity.

Graduate of the renowned circus school in Kiev, with emphasis in aerial acrobatics, Olena has impressed circus audiences across the world performing in Great Britain, Holland, Germany, China and beyond. She has also been featured in television broadcasts such as “Traumtänzer, the Best of Variety” in Kassel. At the Circus Festival in Wiesbaden, Germany she was awarded the prize for best performance and in Wuhan, China received a Bronze Medal at the International Festival. Her performance in June 2003 charmed the Prince Rainier in Monte Carlo III of Monaco for his 80th anniversary. Her solo on Aerial Ring continues to shine in numerous Variety, Gala and Circus productions across Europe. 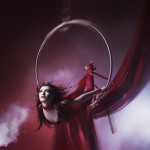 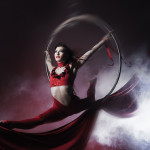 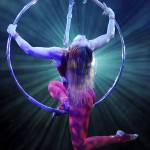 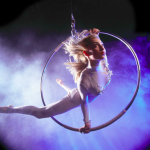